It’s not that I can’t keep a secret … I usually can … but when it comes to Love Bomb and her Aussie kitten, I admit, I struggle to keep things contained. I’m quick to express my feelings of hurt and anger, firing off spicy messages, usually via text. The feelings race in so hot, so miffed, so painful, sometimes I just can’t help myself.

I’ve been sitting on some information for a few days now that ohhhhh man, I want to throw out there to SOMEONE, but I’ve managed to it keep it to myself.

Is that progress? Is that growth?

Reaching out has never actually gotten me anywhere close to what I hope for in return: some semblance of remorse, guilt, or sorrow for the way she left me / set me up / sabotaged / replaced / and kicked me out of my home. Usually she just ignores me or complains that I talk to her like shit. Yeah. Yeah, I do. Because she treats me like shit.

Regardless of their engagement status, Love Bomb and her New Girl have been wearing matchy-matchy rings, from what I can tell, since about November. How can I tell? I looked. I used to look via New Girl’s public Instagram account. Interestingly, she’d go private for a while and then, upon receipt of flowers or a love note, suddenly she’d be public again. She did it to hurt me, as if I wasn’t suffering enough.

And then, in December, for whatever reason, she was gone. Maybe she found something better to do than show off for me, since she’s the one whose already “won”; since she’s the one who has a relationship to immerse in. She, and someone else I used to know. Even their “baby’s” profile (their breeder-bought *messofabreed* dog) was hidden from me. K, byeeeeee!

It was around Easter when my curiosity piqued again. I found myself a-googlin’ on a (rare) slow spring afternoon at work. I checked PWCo. real estate records to see if the house was foreclosed yet. I perused the public record of Love Bomb’s second bankruptcy progress. I scoffed at New Girl’s traffic tickets. And then, there it was … an Instagram page with a familiar pair of twatwaffles, publicaf, right there on what’s called an “Instagram Viewer”. Who knew?! It was as if some greater power plopped the site right in my lap, as I’ve never been able to pull up the same search result, since. But there it was, and really, I did not have to look all that hard to find it.

There it was, mixed among weight loss and Zulilly ads, their perfectly picturesque existence, “spoilt” and “thoroughly loved”, living their “favourite” lives. My dogs. My cats. My fish. My old blankets and dog beds. Trinkets that used to decorate my walls and plants that used to hang from my ceiling. A mess of dusty crap, cords, and boxes that used to litter my home.

I try not to check in too often. I recognize that it just makes me upset. Friends who used to show me Facebook happenings have stopped, thanks to my near-breakdown about the engagement announcement(s). They remind me that social media is not real life, and assure me that things are never quite as they seem on social media, particularly when they seem perfect.

But wait. Lets back up just a little bit , back to that whole engagement thing that sent me on a dizzying spiral to Miserytown a few weeks ago. So, that was an example of one of those times that I let my emotions get ahead of me and lashed out at Love Bomb. I wanted to know why she wouldn’t tell me herself, after allll that time we shared, it seemed like the least she could do was tell me in person, and not allow me find out via social media. (Rude.) I raged ferociously regarding Kevin’s description of a “Dog’s Breakfast” life with me. And then, I tried to reason with her, smooth things over with a pic of my most recent foster kittens that she missed seeing by not coming upstairs to drop off the tent. Finally, I asked the following:

“It might soothe my heart if you could assure me that the bands you wear with your rings aren’t either of the ones you and I shared on the same finger.”

And I fucking believed her.

Not two weeks later, I popped on over to that Instagram Viewer just to, you know, torture myself. And guess what? I think this little collage really says it all… 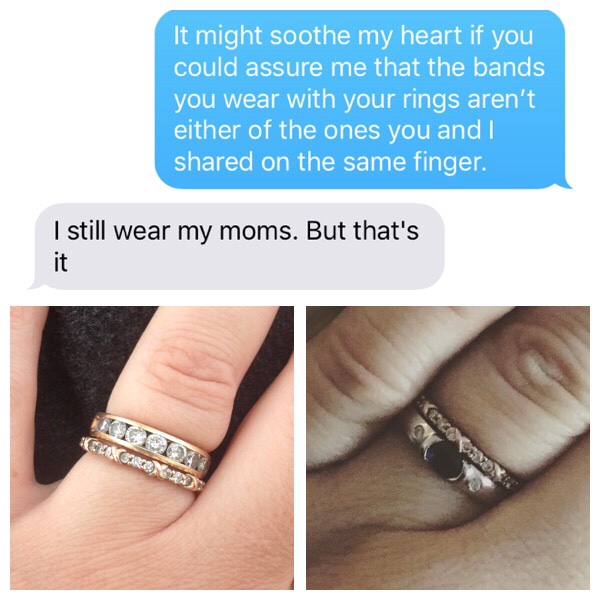 Holy fucking god damn shitballs, you fucking lying bitch, I fucking hate you. Is that clear? Not only have you placed the ring that I wore for years and years and YEARS on your New Girls’ ring finger, but then you bold-faced lied about it! I don’t know which is worse!

And why… why just 2 weeks later? Am I assuming too much? Are you out there, New Girl? Are you showing off?

I deserve more than someone who holds me just so their hands are not empty. View all posts by mazie_cakes

This is a text widget, which allows you to add text or HTML to your sidebar. You can use them to display text, links, images, HTML, or a combination of these. Edit them in the Widget section of the Customizer.
Loading Comments...
Comment
×
%d bloggers like this: